What is it?
8-LED stick using HD107s addressable LEDs. Easy to program: SK9822 and HD107s can be driven via 2-wire SPI bus, instead of needing specialized timing. Additional sticks can be hooked up, for example, to make a POV display. Supports speeds up to 500,000 LED updates per second.

These are compatible with most addressable LED libraries, just use the SK9822 or APA102 mode instead of WS2812. However, since they’re compatible with a standard SPI bus, it’s easy to write your own driver for a leaner, faster project overall.

Note that despite the datasheet, an “end frame” is not necessary, and serves only to push data to additional LEDs if you have more than 64 LEDs connected. Additional “start frames” are actually recommended for this action, as they will prevent LEDs from lighting unexpectedly, however if using fewer than 64 LEDs, the end frame can be omitted, and only the start frame is necessary.

Why did you make it?
There are almost no LED sticks made using the newer HD107s model addressable LED. I wanted to offer a better, easier to use product which uses newer technology for a fair price.

What makes it special?
Unlike most addressable LED sticks which use the older WS2812 standard, these are made using newer HD107s LEDs. Advantages:

Faster: HD107s support a varying data rate up to 500,000 LED updates per second. WS2812 only supports a fixed 30,000 LED updates per second.
Faster PWM rate: WS2812 uses a 400hz PWM signal for color display. HD107s uses 27Khz, resulting in a much smoother image, better low-light performance, and availability for POV displays.
More versatility: HD107s include a 32-level “brightness” value which increases the effective number of brightness levels from 256 to over 3,000 and improves fine brightness control at lower brightness levels. – Lower power: HD107s uses the latest in power saving technology, offering a 25% reduction in power draw, and an automatic sleep mode offering up to 99% power reduction when the LED is turned off. 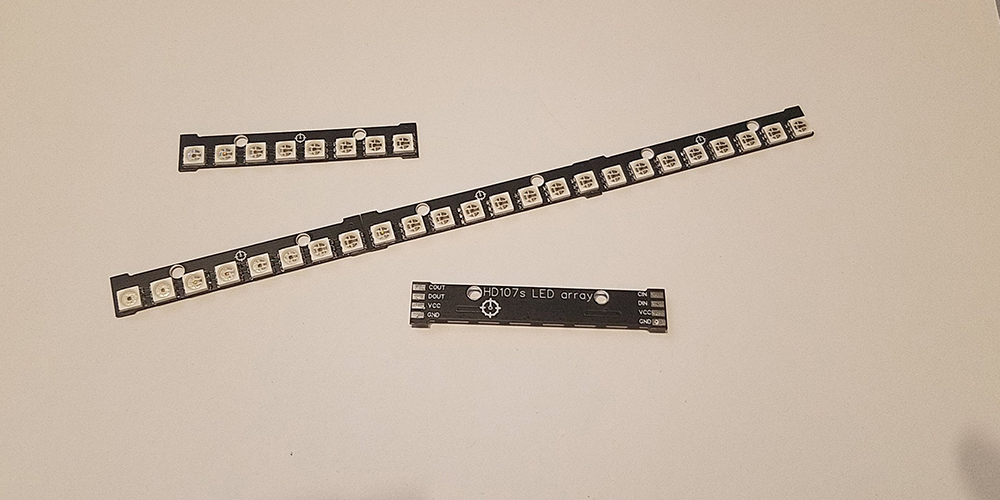 Many customer has doubts on the TM512AC and UCS512C4 DMX512 IC, and we have some customers complained the UCS512C4 DMX512 RGBW led strip which gamma curve of only 1.0 with which is a linear progression between brightness and DMX Value and with 8 bits of data [...]